In honor of Independence Day, here are some of the coiffures of the revolution. 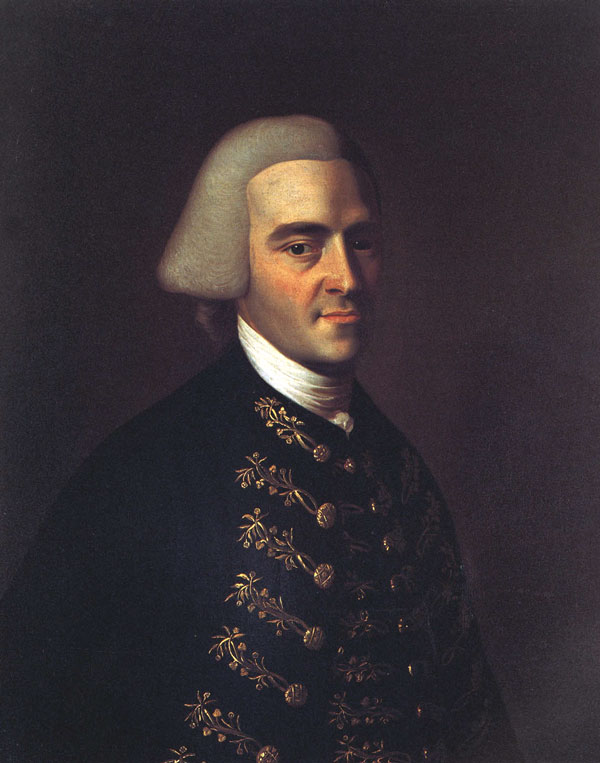 John Hancock (1737-1793)
John Hancock, first governor of Massachusetts – in this portrait, he wears a hard front wig, most likely made from yak or horse hair and powdered. Until the revolution, a heavy powdered wig was standard for a respectable man. Though it would have been made from hair, it is better to think of these wigs as a hat as that is how the men regarded and handled them. There was no pretense of naturalism and the pieces were stiff, sturdy and highly stylized.

The heavy powdered wigs quickly went out of vogue at the end of the 18th century, being seen as an affectation of the aristocracy, a class that was especially reviled after the French revolution. Older men were still seen wearing them, but they were no longer standard. 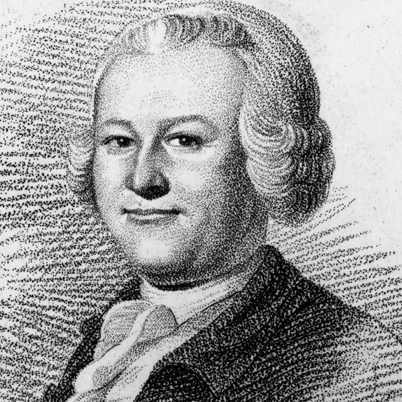 In the above etching, James Otis (generally credited with coining the phrase “Taxation without Representation is Tyranny” ) is pictured wearing a “bob” style of wig. This shorter style is often seen on members of the clergy. It’s hard to be certain, but it appears as though we see Otis’ own hair peeking out from under the hard front of the wig – his widow’s peak would have stood out against the typical square hairline.  As there was no pretense of naturalism with these wigs, seeing one’s own hair sticking out would hardly have been seen as a problem. 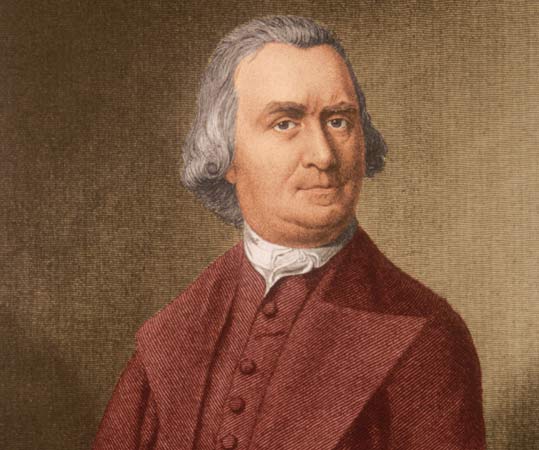 This painting of Samuel Adams shows one of the stylistic choices painters seem to have used in the 18th century. On first glance, we appear to see Mr. Adams in his own hair – the hairline is natural-looking, compared with the painting of Hancock above. However, the curl in the ends of the hair, the powder gray color, and, more tellingly, the slightly darker point of Adam’s widow’s peak sticking out of the hair indicate that Adams is, in fact, wearing a wig. 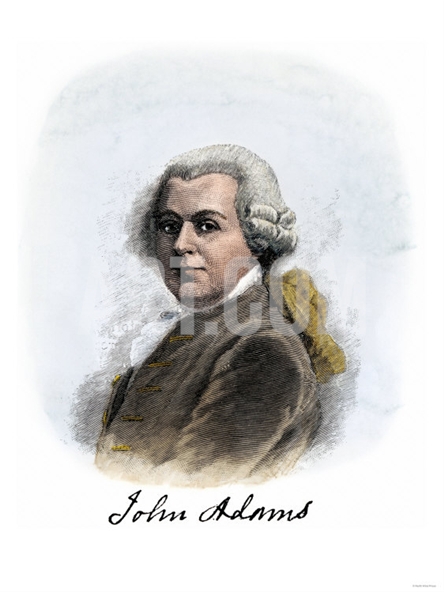 This rendering of false hair naturally is shown very well in these paintings of John Adams, 2nd president.In the first image, we see a young John Adams wearing a very obvious powdered wig.
Later in life, paintings of Adams show his wig less severely. Both of these painting were done in the early 1790’s. In the left painting, we seem to be seeing Adams in his own hair, with a thinning top.  Like the painting of Samuel Adams, the painter has chosen a natural treatment for Adam’s wig. In the painting to the right, the lines of Adam’s wig are more clearly seen. 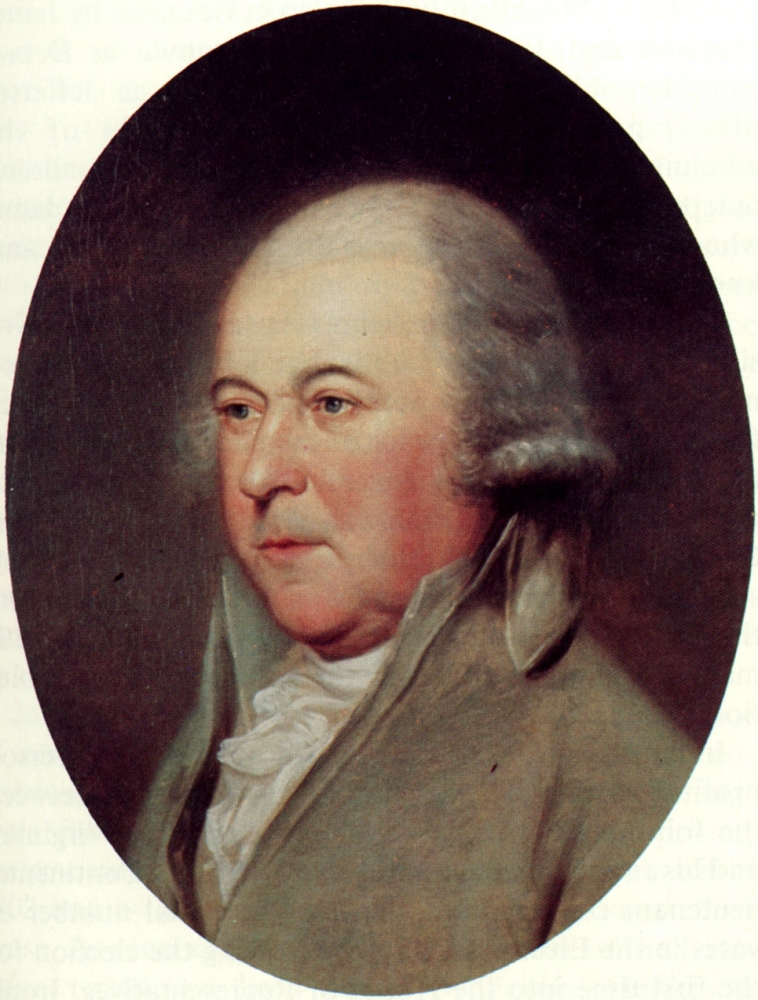 This quote from a letter written by Thomas Jefferson indicates Adams continued to wear a wig throughout his presidency, however fanciful the idea of Adams flinging it around may or may not be 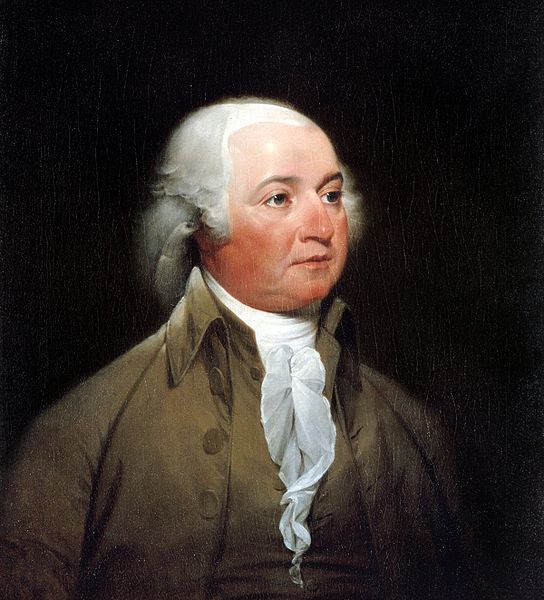 I have heard, indeed, that my predecessor [President Adams] sometimes decided things against his council [Cabinet] by dashing and trampling his wig on the floor. This only proves what you and I know, that he had a better heart than head. 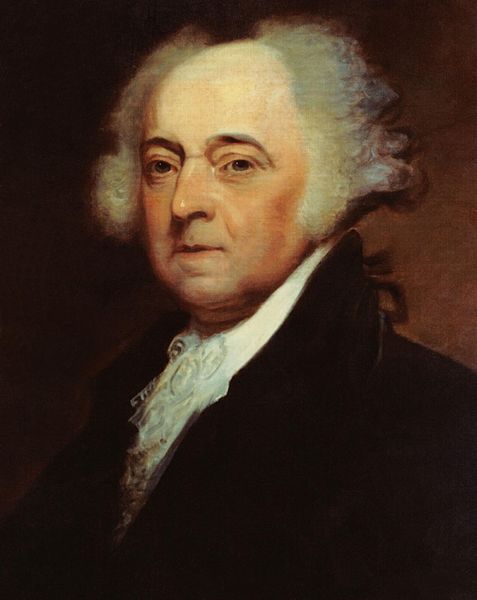 This is probably the  most well-known portrait of John Adams, painted during this presidency (1797-1801). Is this the wig Adams is supposed to have flung around and stomped on? 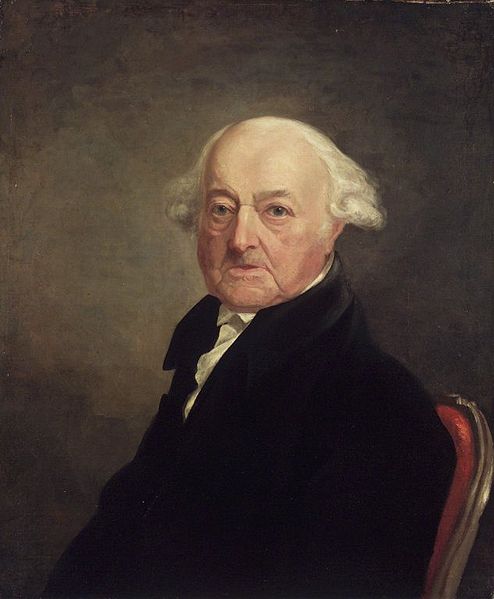 An elderly, balding Adams in 1818. While the silhouette of the hairstyle appears very similar to the wigs of his earlier portraits, wigs for men had gone largely out of use by this date. It is certainly possible that Adams clung to the style of his youth, as people tend to do. It is also possible that by this point he had chosen to wear his own hair (and bald head). Note that whether this is his own hair or a wig, it retains the side curls he wore for most of his life. 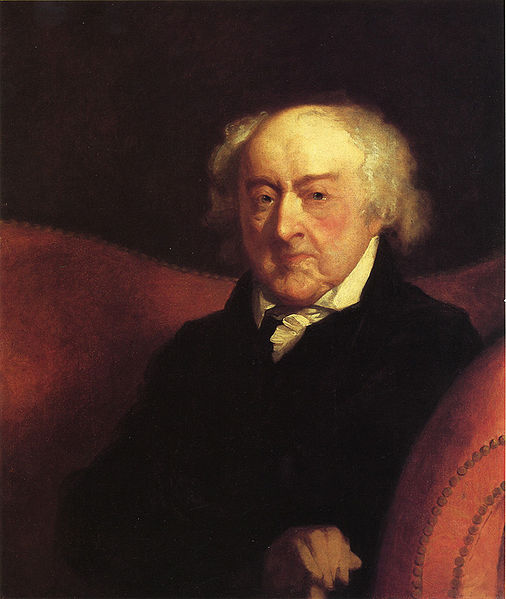 Adams just before his death in 1826. This is certainly Adam’s own hair

Let’s not forget the ladies, to badly paraphrase our next subject, Abigail Adams, wife to John Adams and mother to John Quincy Adams.

This double portrait shows John Adams (yes, we’re obsessed with him, apparently) and Abigail as a young couple. His wig is a very impressive specimen, with its large, full-bottom and coarse curls. By contrast, her hair is pulled simply back into a bun, a common silhouette for ladies in the middle of the 18th century. Later in her life, Abigail adopted the larger hair style typical of the late 18th century.

This is probably her own hair, gray by the time of this portrait in the mid 1790’s, though she could certainly have used hair powder as ladies were wont to do. The style is similar to the previous portrait, except that the silhouette is much larger and there is a greater coarseness to it. The light ruffled cap was typically worn by older women. This painting shows George Washington with Martha and her children. Her hair is dressed in a similar style to Abigail Adams and she has the light cap adopted by matrons. We also see Washington in his simple, powdered with – the long hair is gathered into a tail at the back, called a queue.  More than the other “Founding Fathers”, Washington seems to have favored an elegantly simple wig, and seems to have stuck to the same basic style throughout his life.

There are so many fascinating heads of hair from the Revolutionary War. This blog can only focus on a few examples from an era filled with exaggerated wigs, enormous hairstyles and colorful characters. All observations are taken from documented sources when possible but the conjecture and commentary are my own, and thus subject to scrutiny.